Like so many people I really enjoyed reading Japanese light novels, Korean light novels, and Chinese light novels. The good thing is there thousands and thousands of light novels out there. The bad thing is most of them are a waste of your time to read them. On this page, I add any books I have read personally that I enjoyed or I thought were interesting. I will continue to add a new book to this page as fast as I can. The problem is I read books that so good at being then about halfway through it starts going down the drain. I sure some of you can relate. I hope you find something that piques your interest while going through my list.

For twelve years, the virtual world of Yggdrasil has served as the playground and battlefield for the skeletal lord Momonga and his guild of fellow monsters, Ainz Ooal Gown. But the guild’s glory days are over, and the game is shutting down permanently. When Momonga logs in one last time just to be there when the servers go dark, something happens–and suddenly, fantasy is reality. A rogues’ gallery of fanatically devoted NPCs is ready to obey his every order, but the world Momonga now inhabits is not the one he remembers. The game may be over, but the epic tale of Ainz Ooal Gown is only beginning…

Tomokui Kanata has suffered an early death, but his adventures are far from over. He is reborn into a fantastical world of monsters and magic―but as a lowly goblin! Not about to let that stop him, the now renamed Rou uses his new physical prowess and his old memories to plow ahead in a world where consuming other creatures allows him to acquire their powers. 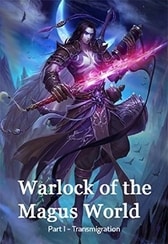 Warlock Of The Magus World
by Wen Gong (Author)

Description
When a futuristic scientist is transported into the body of a young man in a fantasy world, his curiosity and desire for power push him to pursue magic. In a world without mercy, Leylin has no qualms about doing anything if it means benefits. He is cold, ruthless and calculating, never forming attachments that could impede his ultimate goal…

Honor? Who needs that… Hmmm… that guy seems too powerful for me to take on now… I better keep a low profile for now.

You want me to help you? What do I get out of it? Nothing? Bye.

Hmm… that guy looks like he might cause me problems in the future. Better kill him before he becomes a problem…

Theme by Anders Noren — Up ↑